Preview of the Country Music Half 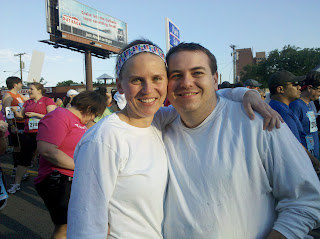 Posted by Happy Girl at 6:04 PM No comments:

Yesterday as Bart and I were driving down Hillsboro, with its notoriously thick traffic, I spied a laptop. Yes, thorugh my amazing powers of sight, I saw a laptop. But not just any laptop, this circus-aspiring laptop was balanced on the edge of the bumper of the SUV in front of us. I scared the living daylights out of Bart as I hopped out of the car at an intersection to grab the computer and take it up to the driver. Entire experience: 15 seconds. Entire effort: walking 15 feet. Look on some stranger's face when he realized where he had left his computer: kinda funny, and also priceless.

The best part of this whole 15 seconds? It made MY day to save the day. Even though I didn't really do anything, I was in the right place at the right time, and I happened to notice a problem at a time when I could fix it. No joke, it totally made my day.
Posted by Happy Girl at 6:10 AM No comments: 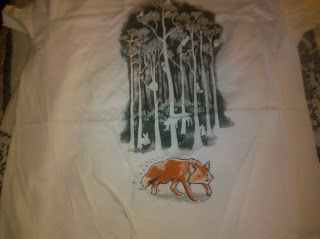 If your aware of my affinity for foxes, you understand how much I like this shirt.

The Disney Princess Half Marathon was a huge flashy event, just check out the pictures below. The race I ran on March 12th was a humble local race that proved to be just as much fun. Do to the lack of glitz and glamour, I don't have any pictures from TKC, but I'll tell you about it anyways.

Tom King is a real guy. I saw him on Saturday. I know I saw him because he was wearing a shirt that said "I am Tom King." Pretty plain and simple... except I still have no idea why they named a race after him. 10 points to anyone who can figure this out. I already googled his name and all I can come up with is more information about the race. Well, actually there were two races.

The Tom King Classic consisted of a half marathon and also a 5k. It was a fun day with friends since Bart came and ran the 5k and Mary and I ran the half. After a lot of dull and dreary weather, it was a beautiful sunny day in Nashville. It was a little rough since none of us had really trained in the heat. Mary and I spent part of the race reminiscing about our 11 mile loop at Percy Warner that took us over 3 hours to make our way over the snow and ice covered roads.

The race course started outside of LP field, and followed the Cumberland river along roads and some nice paved trails. It was an "out and back" course, so we ended the race back at LP field, but this time, we ran inside the stadium, and crossed the 50 yard line where we got our medals from ...(wait for it)... Titans cheerleaders! Yeah, OK, the NFL cheerleaders would've been more exciting for the male runners. They weren't even wearing cheerleader costumes, just track suits.

Overall it was a good time, and I am happy to report that I set another PR. Hopefully I'm on my way to running The San Diego Half Marathon in under 2:30!
Posted by Happy Girl at 3:45 PM No comments: 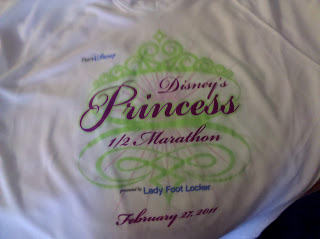 It's been more than a week since the Disney Princess half marathon and I'm still trying to sort it all out in my head. I am conflicted. On one hand it was the best race I've ever seen. The Disney "magic" was certainly in the air with great entertainment along the course, and the sheer awesomeness of running through the parks. However, on the other hand, it was by far the most crowded race I've ever run. The crowds ranged from "discomfort at losing my personal space for many miles", to "slightly dangerous when I almost trip over the girls who stopped in the middle of a narrow path to take a photo." Enough with the editorializing. Here's the rundown:

2:30am: The alarms ring. I squeeze into my compression pants. My "magic pants" became the butt of some jokes, but they are worth every second of the five full minutes it takes to get them on. It takes even longer to change out of them. Why do they have a drawstring?!?


3am: Manda, Tess and I board the bus that will take us to the race. everyone on the bus wears the same bleary-eyed look.

3:15-5ish: We wait. There's a stage with a DJ playing music and trying to make witty banter about racing. My gut tells me that this guy doesn't know much about running. He does give out my favorite quote though, referring to the runners as "16,000 princesses and a couple of dudes." (In reality there were more like 600 men. Although, truth be told, many of them were dressed as princesses). Our group spent most of the time sitting (or laying) on some old sleeping bags. We were super-lucky to have them since everyone else had to choose between standing or sitting on the cold ground. 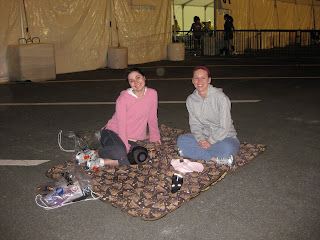 5am: The dj tells us to make our way to the other side of some big white tents.  Signs stating "runners only beyond this point" make me think we're going to the starting line. FALSE ALARM. We're in another parking lot. We continue to sit on our snuggly sleeping bags until it gets too crowded. More and more people are coming over from the first parking lot, and there's not enough room for people to sit, so we end up standing again. 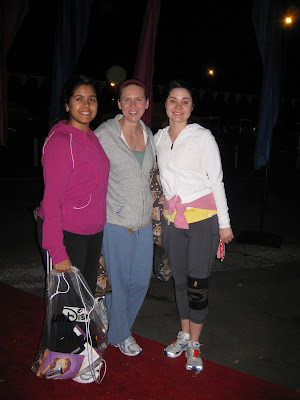 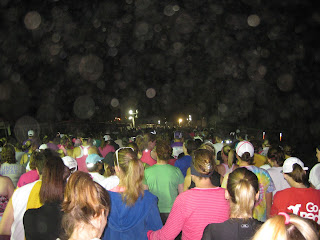 5:35: The starting line! Well, we were a few corrals back, so we couldn't really see the starting line, but we knew it was there. Disney had set up huge TVs to show us what was happening on the main stage. Each wave of the race got a 3...2...1...go from Cinderella's Fairy Godmother and fireworks.

Mile 1: Did I mention that the race was crowded? We are elbow to elbow in the pre-dawn dark.

Mile 2: Marching band! I'm excited. I may have told the mellos to keep their chins up.

Mile X: There are tons of Disney characters and other cool attractions.

Mile 6: We enter the Magic Kingdom. The course narrows as we run down "Main Street USA" towards the castle. This is where two girls stop right in the middle of the course to take a picture. The girl in front of me stops suddenly and I almost trip trying not to run smack into her. Running through the castle is pretty cool. I'm a dork, so I'm especially enthralled by the herald trumpets.


Mile Y: The entertainment continues and the sun is finally up! I'm afraid I'm getting a sunburn. Sunscreen wasn't really at the top of my list when I left the hotel in the middle of the night.

Mile 12: We're in Epcot! This is probably the prettiest part of the entire course. The Ecpcot flower festival starts in a week or so and they're already getting ready. The landscaping is beautiful and bright with all kinds of different flowers. The fountains are pretty, too. 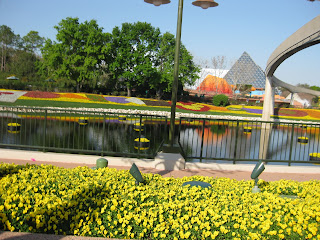 The finish; Hooray! Back to the dj and parking lot from 6 hours ago. I get my medal, some water ad powerade, and a blueberry muffin. I have no idea why Disney cheaped out on bagels. In general I don't care for bagels, but I crave them after a race. 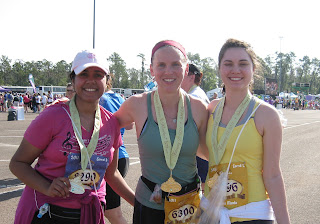 Next: Showers and a day in the theme park! We were tired, but happy.
Posted by Happy Girl at 2:27 PM No comments:

The Disney Princess Half Marathon

Wow. What a weekend. I often return from vacations feeling as if I need a "vacation from my vacation" and this is no exception. We were on Disney property for just two days and we crammed in as much as we could in our short time there. Here's a quick recap of the weekend in general.

Arrive at our hotel, eat dinner at Wolfgang Puck's restaurant in Downtown Disney. The food was amazing, and even though I was exhausted after traveling all day, I still managed to muster up some excitement at getting a copy of Puck's butternut squash soup recipe and seeing Bruce Willis. Oh, yeah, we totally saw Bruce Willis.

How much can we possibly do in one day? We started off going to Disney Hollywood Studios (The theme park formerly known as MGM Studios) where Manda and Tess rode Rockin' Roller Coaster and Tower of Terror. We got some cute pictures as we boarded the Great Movie Adventure Ride. We ate lunch at Hollywood Studios and then headed for the expo.

I rode some amazing and famous rides this weekend. I stood in long lines for Thunder Mountain Railroad and Space Mountain. I stood in line for bathrooms and restaurants. But the longest most miserable line I stood in all weekend was at the expo. I stood shoulder to shoulder with thousands of other people while trying desperately to get my bib. Disney does some amazingly organized things, but this expo was NOT one of them. For those of you who know how much I like order, and how much I dislike being thisclose to strangers, you can imagine how this was the low point of the weekend. Eventually I got my bib and looked around a little bit. I didn't buy anything, but I did get a free t-shirt and I registered for the San Diego Half Marathon.

Expo over... what's next? MAGIC KINGDOM! The heart of Disney, if you ask me. We walked around, shopped and rode rides. It was crazy-crowded but we were troopers. I was getting nervous about the race, and got a little stressed out over how tired I was, but that didn't put a damper on the joy of Disney. My only disappointment is that Splash Mountain (my favorite ride of all) was out of commission and I didn't get to ride it. Around 9, after the fireworks were over, we headed back to the hotel.

The wee hours of Sunday morning:

Our alarms went off at 2:30am. For those of you counting along at home, that is 1:30 in the morning central time. Four short hours of sleep was all we could handle before getting ready for the race. I really think the race deserves its own entry, so you'll have to wait for all the detail.

After the race was over, Manda, Tess, and I headed back to the hotel to shower, catch a cat nap, and get ready for another day in the parks. I think only the magic of Disney could make us want to wake up at 2:30am, run 13 miles, and STILL want to go walk around a theme park all day.

EPCOT! We ate lunch at the Coral Reef restaurant and then headed to the world showcase. We had a blast strolling through different countries. Epcot was much less crowded than Magic Kingdom had been, and I think we were all grateful for the slower pace. One thing I had not remembered about Epcot was how many "impromptu" performances took place on the streets. There was a percussion group that played on trashcans, and an Italian street show that were both really fun to watch. At our post-race walking speed, we didn't get to see much of Epcot other than the world showcase, but by the time the park closed at 9pm, we were ready to sleep.

Back in the car. It seemed like we had just arrived.

A sneak peek of Disney 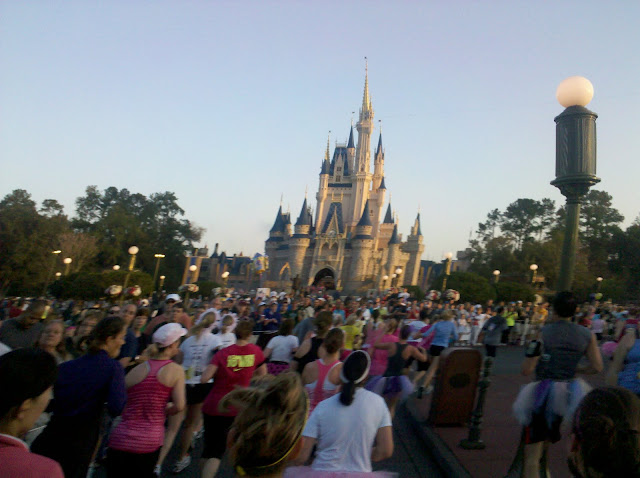 Happy Girl
Lots of things happen in my life. I like to hold on to he ones that make me smile.